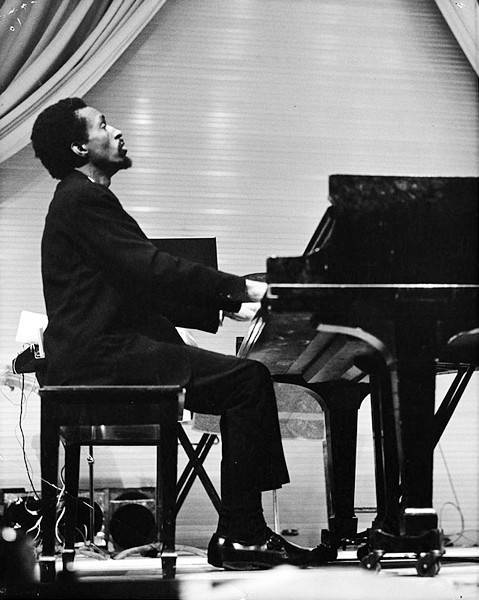 Julie Sassoon is a pianist working in the field of jazz and improvised music. For the opening of the Maerz Musik Festival in Berlin, she played three works of Julius Eastman (1940 –1990), of which two were German premieres. Sassoon’s piano colleagues for the concert were Christoph Grund, Ernst Surberg and Małgorzata Walentynowicz.

In the interview Sassoon explains why playing Eastman feels like running a marathon, she talks about warm and cold minimal music and denominates why she always had a strong connection with black culture.

Look at the essential Julius Eastman project by Mary Jane Leach at:
http://www.mjleach.com/eastman.htm

Note: If you, our highly appreciated reader, don’t mind literally trampling on somebody’s work of art under your feet, then go and visit the current exhibition on Julius Eastman at Savvy Contemporary, Berlin. There you’ll walk on copies of Eastman’s scores which are put onto the floor. We think that is absolutely undignified, that’s why we can’t recommend the exhibition.

Franziska: Julie Sassoon, how did you first get to know about Julius Eastman?
Julie Sassoon: I didn’t actually know about him until Ernst Surberg asked me to play in the project. He sent me the scores and then also recordings of it and I thought it was great. I didn’t know anything about Eastman. Now people are hearing about him but… it’s terrible, isn’t it. Thank god somebody’s showing an interest.

What comes to your mind when you look at the scores?
Lots of repeated notes. When I first saw it I thought it is easy, it’s changing, it’s shifting from one note to the next note and then you have a time code when it changes. When I first heard the recording and I heard how – are we allowed to say the names of the songs? They’re so incredibly heavy…
When I saw Crazy Nigger goes on for 50 minutes and you’re going (beats fast on the table) dddddddddddddddd – first I was very excited and then I thought, this is not what a pianist would normally do. Within that 50 minutes you have lots of dynamic contrast, you can’t keep going at the same intensity. Actually the intensity stays for the whole piece even in the quiet bits, that’s the idea. When I improvise or when I play in my own project I may go ddddddd, but when I’ve had enough I’ll stop. I play very physically anyway but this is just relentless and I thought I don’t wanna get tendinitis, I don’t wanna injure myself. Then my partner said to me ‚well, it’s a bit like running the marathon, you need to build up slowly‘. So in the last two months I’ve been slowly working on these repetitive movements, as if training for a marathon. However when you’re in the moment of performance, you just do it.

How is that connected to the title of the piece?
There’s a certain kind of energy which I think Eastman has. It’s like a raw energy and once you tap into your own raw energy the piece just flows….. you don’t notice time passing, but you do feel physically and emotionally exhausted after the 50 minutes. But it’s not just the notes. When you’re just hitting that one note I can imagine his kind of anger and what he’s trying to express.

What develops between you four while you play Crazy Nigger?
It’s a huge room and the lids are off the piano so the sound just escapes into the atmosphere. Just now in rehearsal it was difficult to hear clearly whether we had the same tempo for the first few minutes. The main thing is then to connect to one another. To open your ears as wide a possible … and connect to the sound and tempo of the other pianists. Once that clicks, you don’t think about it anymore and then it just gets closer and closer, you become like one organism. A lot of the the music is not set, so for example between 3 minutes and 6 minutes, there is a choice of maybe seven notes which you’re repeating and you don’t just play it, you have to listen to what the others are doing, if they’re playing it full force or if they suddenly pull back a bit and it effects how you play. You’re listening and you don’t wanna double the same notes, you’re permanently completely connected to the other three. And it’s all complete by chance because it fits so well together. There’s nobody trying to be louder, literally you’re a collective four. The appointments that we’ve made are completely flexible so we say here it would maybe be good to do this but when we play it and have a different feeling at that moment we will go with how the energy is, we move together. At certain points you forget yourself completely and you’re just in this sound. I think that’s what Eastman must want, it’s absolutely great.

How can you compare this experience to yours in improvised music?
The thing that’s similar in improvised music is again, your ears have to be so wide open. The impulse of one triggers something in you and the more connected you are with that person the stronger that improvisation is going to be. I really enjoy free improvisation. The difference to playing Eastman is that in improv there is nothing you start with. I have minimal elements in my own music, especially that idea where you repeat and repeat and get deeper into something – then you reach a place in yourself which only music can bring you to, like a meditation. This is important to me. Repetitive figures, that’s the way in, whereas if it’s shifting all the time it doesn’t go so deep.

Eastman’s compositions ‚proceed in blocks of real time‘, as he writes in the performance instructions for Crazy Nigger. Could you describe the relation between the time blocks and the individual choices you have?
In Evil Nigger the first figure is played for 30 seconds, you repeat this in different octaves. So you can start in a high octave or in a low octave until the next line comes in. We are four players and there are seven lines and we may all choose to play this top line but you better not because Eastman really wants every voice to be heard. So you’re kind of juggling whilst you’re listening to what the others are doing but you also have to have a bit of conviction in what you’re doing. When I listen I don’t want to know what’s gonna happen and also as a performer, the best is when you don’t really know what’s gonna happen.

How do you look at Julius Eastman in the field of minimal music?
He’s got something else, he’s got that kind of raw energy which is real. I played Steve Reich’s Six Pianos many times, which is just mind-blowing. But it’s not meant to be shaking the earth, it’s meant to lead you into this trance. Eastman is pushing you over your limits. He was an outrageous character and these other minimalist composers, they didn’t have the same edge. When I played Steve Reich and when I played Philipp Glass I felt that Reich has a certain warmth and beauty to it that I can melt into. I always found Glass much colder, it doesn’t touch me.

How do you personally relate to Eastman?
What I maybe understand because I’m Jewish, I’ve always had a strong connection with black culture. I’m very comfortable with every minority because I am one myself. So maybe I have an understanding of that energy that he has. When I moved to Berlin I felt I can’t just move to Germany, having lost my great grandparents in Auschwitz. So I made a solo piano album which reflects my personal family history („Land of Shadows“). I recorded it in Neue Synagoge in Berlin.

The song New Life was recorded in the theater in the Bauhaus Dessau, a very emotional experience. This has got the raw energy of Eastman. Because when I touch that source it feels like it’s coming from the same place as his music comes from. It’s maybe this connection.

At the end of Crazy Nigger Eastman writes ‚Let Sonorities Ring‘. What does that mean?
From minute 46 till minute 53 you’ve had a built-up from one repeated C-sharp at the bottom, each lasting ten long beats. Then a new note is  introduced by the next player for a short length, and then by the next and so on. Altogether by the end of this build up there are 19 notes that need to be played. The higher the note – the faster it’s played.  Eight more pianists are brought to the stage  – we invited friends of ours –, to enable all 19 notes to be played.  All 19 notes are sounded – like bells being struck – all at varying speeds, and it creates the hugest sound you can imagine on the pianos, drawing every harmonic possible out of the strings.

This continues for six minutes until a certain point, when you stop playing but you keep the pedal down and you ‚let the sonorities ring‘. You listen till the sound dies away, that’s the end. Eastman must have wanted to create the most sound you can get out of the piano.  It’s a wonderful thing to hear.  The silence that follows is so incredibly silent. The contrast is huge.

Julie Sassoon recently released a new album with her quartet, „Fourtune“.
The German CD launch will be on April 19 at A-Trane, Berlin.